Category Archives: elements of a narrative

When parents ask for writing help for their children, what kind of help do they want? 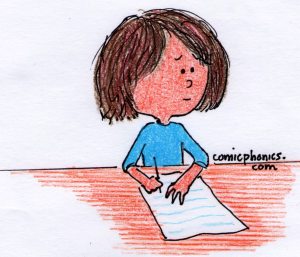 Most parents have no idea so many elements combine to create good writing.  When they see a list like this, they are taken aback.

That is why it is important for parents and teachers to agree on what students should learn at various ages.  If a parent thinks the student should be perfecting grammar, but the teacher instead focuses on organization of information, the parent will not be happy.  Or if a parent thinks a student should be using a great piece of rhetoric as a model, but the teacher wants the student to develop his own way of expression, again the parent will be dissatisfied.

Only when a parent is aware of all that a student is expected to learn can the parent and teacher have a meaningful conversation about how to improve a student’s writing.

Is it worth taking time to let students evaluate others’ writing?

Recently I asked second graders to write stories based on the picture book, Flora and the Penguin by Molly Idle.  Since the book is wordless, the students were forced to write their own versions of the story relying not on the author’s words but rather on the illustrations for guidance.

Later, I selected portions of two students’ stories for comparison.  I typed and printed them side by side, so students could compare how the two students wrote the same parts of the story.

Here are some of the comments students (second through eighth grade) made:

After their blow-by-blow analyses, I asked my students what they learned from evaluating other students’ writing.  They said:

One second grader, who rushes through her writing, compared her  plain version with the two shown here and said, “I’m starting over.”

A seventh grader who read the two versions, said, “Second graders?  Really?  I didn’t think I could learn good ideas about how to write from second graders.”

Is peer evaluation of writing a good idea?  You decide.

What writing skills are expected of fourth and fifth graders?

What kind of writing should second and third graders do?

Here are what the Common Core State Standards (CCSS) expect student writers  to achieve in second and third grade. 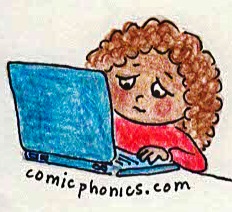 In second and third grade, the CCSS also expects students  to begin to use electronic equipment.

For more information, go to http://www.corestandards.org/ELA-Literacy/W/3/.

How to describe a story in a sentence or two

Professional writers  learn how to describe their novels in just a few words.  Sometimes this is called an “elevator” version meaning short enough to be said by a writer on  an elevator ride.

Learning such an approach before writing a story is also useful for children writing narratives.  In a sentence or two they should be able to name the important parts of their story, such as

If the child writer cannot name all of those parts, his story is probably flawed.  It is  missing an important element which readers want.

Two books meant for adults which explain this well are Techniques of the Selling Writer by D. V. Swain and The Anatomy of Story by John Truby.

Swain suggests a two-sentence pattern.  The first sentence is written as a statement.  It should include the situation, main character and objective of that main character.  In the second sentence, a question, the opponent should be identified and the climax or disaster near the end of the story should be named.

Here is an example for Charlotte’s Web by E. B. White.  Wilbur, a piglet on a farm, must devise a plan to protect himself from being slaughtered for bacon.  Can he and his friend, Charlotte, figure out how to keep the farmer from killing him now that he is plump?

Or, in The Cat in the Hat by Dr. Seuss, two bored children are entertained at home by a playful cat.  But can the children put the  house back to order before their mother sees the mess?

Truby suggests a one sentence pattern which he calls a premise.  In it should be the event which starts the action, the identity of the main character, and the final outcome of the story.

For example, in Charlotte’s Web, Wilbur, a farm piglet, escapes death as a runt but later faces slaughter until his friend Charlotte figures out how to make him too famous to kill.

Or, in The Cat in the Hat, a playful cat arrives to end the boredom of two children who find ways to hide his antics and mess from their mother.

To use this approach to story writing with children, you might start with some familiar stories and analyze them.  In Junie B. Jones and the Stupid, Smelly School Bus by Barbara Park,

After the children get the idea, with you, the adult, leading, think up some scenarios.  It’s Halloween.  A child wants to go trick-or-treating.  Mom says no because it’s raining.  How can the child convince Mom?  Get Dad’s help?  Promise to carry an umbrella?  What crisis could almost ruin everything?  Tthunder and lightning?  What happens at the end?  The child wears boots and a raincoat and Mom holds an umbrella and flashlight?  A text message from the mayor postpones Halloween until the next evening?

Students need modeling to become comfortable with this approach to story writing.  The elements could be written on a bulletin board or on a permanent poster in the classroom for reference.  A five-minute mini-lesson on the elements could precede writing time each time students need to write a narrative.

And some writing time could include just identifying the elements in order to imprint this pattern.  If the students can identify the elements for several stories, then let them choose one to write.  Children need to learn that planning is just as important as sentence writing.