I am working with a high school sophomore who is writing an argumentative research paper, the kind of research paper I was required to write in college.

His teacher identified the type of information required for each paragraph in a handout.  It includes a hook leading into an introduction leading into a thesis, using a funnel effect to taper to the thesis.  The thesis must have several elements, all of which must be backed with data in the body.

The body must have at least three sections of data supporting the thesis, plus a counter argument which must be debunked.  The conclusion should not merely repeat the thesis but in some other way support the ideas of the essay.

This essay is due not for an A.P. course but for a regular sophomore English class.

With another high school sophomore, I worked on a Toulmin essay.  This kind of essay has a rigid structure for each body paragraph.  First comes a position statement or thesis; second, a claim or example supporting the position; third, data cited to support the claim; fourth, a warrant or a clarification of the connection between the claim and the data; fifth, a counterclaim which rebuts the thesis; and last, a rebuttal with data to destroy the counterclaim.

With another high school freshman I worked on a response to a news article using the SAOQ method:  summarize the article in a few sentences; analyze the main idea or some aspect of the article; offer your opinion on the ideas in the article, using logical arguments to back your opinion; and offer three discussion questions of a probing nature to show you have pondered the article.

Connect back to the thesis in persuasive essays 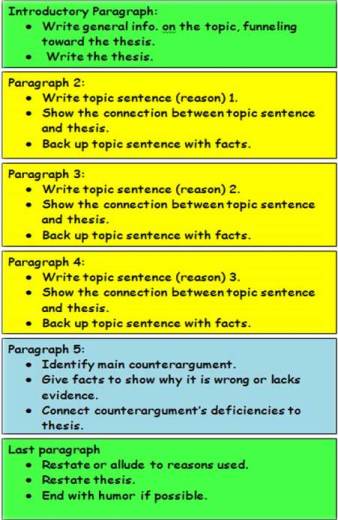 You decide to take the position that yes, Santa is real.  For your evidence, you use the following points:

So far so good.