How to write narrative essays

Narrative essays are short stories, real or imagined.  Like novels, they follow a pattern of beginning, middle, and end, or in academic terms, inciting event, rising action, climax, falling action and resolution. 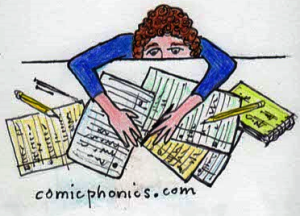 But how do you begin?  This is the question I am asked more than any other by my students.  My answer is the same as for an expository or persuasive essay.  You begin with a written plan.

I have students write the word “beginning” near the top of the page, “middle” about a third of the way down, and “end” a bit up from the bottom (on notebook paper or on a blank page on the computer—it doesn’t matter).

Next to “beginning” I have students write “setting” and draw a sideways V like this:  <.  Extending from the top arm of the <, I ask students to write the place where the story takes place.  Next to the bottom arm of the <, I ask students to write the time of day/season or some other words to indicate when the story is taking place.  For example, these words could be “the first day of middle school,” or “when I broke five ribs.”  I ask students to start by identifying the setting because this is what readers look for when they start to read a narrative.  They want to know if they are reading about the French Revolution or life on Mars one thousand years into the future.  Knowing the setting orients readers.  It should be noted in the first paragraph or two of a narrative.

Continuing under “beginning,” I ask students to identify in a column the characters who will be in the story.  Sometimes this means names and sometimes this means positions or relationships such as “the doctor” or “the hit-and-run driver.”  Next to each character, name the character’s role such as protagonist, antagonist, foil, mentor, sage, trouble-maker or any roles that make sense.  Also list character traits and emotions to emphasize for each important character.

Readers want to identify and get in the head of the most important character, the focal character.  They want to emotionally feel what that character feels.  So decide who that character is.  Usually, it is the protagonist.

Identify the theme you want to show.  In other kinds of essays, the “theme” is called the main idea or the thesis.  In narratives you should be able to state the theme in a sentence such as “Doing something hard in public takes courage” or “Dogs can be exasperating.”  The theme is what you want to emphasize in your narrative.

In a column under “middle,” list the events or incidents that will happen in the story in the sequence in which they will happen.  Usually, this sequence is chronological order.  Any other kind of sequence such as jumping back and forth in time will make your narrative difficult to follow.  I find using bullets is a good way to list, especially if you are using a computer that allows you to cut and paste to reorder information.

You want the “middle” to be long enough so you can identify details to use—maybe 15 lines.  If the “middle” is too short, you haven’t thought your plot through enough.  If it is longer than 15 lines, you need to cut back.  A good finished narrative length is about three pages of text, double spaced, in 12-point type (1000 words).  Many teachers won’t read more unless your writing is exceptional.

Under “end,” write “climax.”  Identify what happens at the climax.  This is where the theme is most evident, where you do that thing in public that is so hard or where that exasperating dog forces you to take action.  At the climax, readers should feel strong emotion.  So should you as you write and reread your climax.

If you have introduced details left unexplained, do that quickly.  Then write your ending.  What is most important is that the ending is satisfying to the reader.  Satisfying is not the same as positive.  Not all endings are happy.  Even when the ending doesn’t turn out as the protagonist hopes, that character still comes away a different person, someone who has grown through the experience.  Make sure your protagonist shows growth and that growth is connected to your theme.

What is theme? How can students write about theme?

These questions pop up again and again as I prepare students whom I tutor for end-of-year state exams.  Often those exams require students to read a passage (or remember a novel or play studied in class) and identify a theme and write about it. 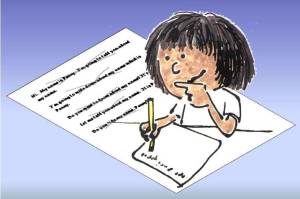 An article by Zach Wright, Assistant Professor of Practice, Relay Graduate School of Education, offers great suggestions in the current issue of Edutopia (see below for a hyperlink) for middle grade and high school students writing about theme.

First, Wright suggests that students think of specific pieces of literature as not being about individuals or specific events, but rather as being about big ideas (themes) such as love or revenge or prejudice.

Next, he suggests students brainstorm a list of such big ideas associated with a particular piece of literature such as To Kill a Mockingbird.  Such big ideas could include parenting, prejudice, abandonment, friendship, integrity, fear, family, violence, and innocence.

Wright suggests teachers keep a list of such big ideas or themes visible in the classroom.  When students read, they should transfer appropriate themes to the back inside covers of their books to create a specific list of themes for that piece of literature.

Next, he suggests students take any three of the themes—he calls them triads—and create a sentence from them.  Starting the sentence with “when” gets the students going.  For example, when a person’s prejudice overtakes a person’s integrity, that can lead to violence.  (Mr. Cunningham has been shown to be a person of integrity early in the book, but when he shows up as part of a lynching mob, his prejudice leads him toward violence.)   Or, when a child’s friendships overshadow that child’s abandonment, that child feels love.  (Dill makes fast friends with Scout and Jem during the summers when he is sent away from home, letting Dill feel love).  Or, when a child’s parent shows love, that display can bring security to the child.  (Atticus shows love to Scout, holding her in his lap while he reads law reviews and answering her questions, leading Scout to feel secure though her mother is dead.)

Wright recommends the teacher know the literature well in order to show how unexpected triads can work and lead to gems of insight.