Want to write like Hemingway? There’s an app for that

Do you want to write like Ernest Hemingway, using active voice verbs; short, simple sentences; short, one-syllable words; and few adverbs?  There is a free web app to help you.  Here’s how the app works.

Type a passage which you want to be more Hemingway-like. Swipe and copy it.  Go to Hemingwayapp.com.  Click the “H1,” “H2,” or “H3” button at the top of the app screen to allow you to paste your passage.  Or click the “write” button in the top right corner to compose on the site. 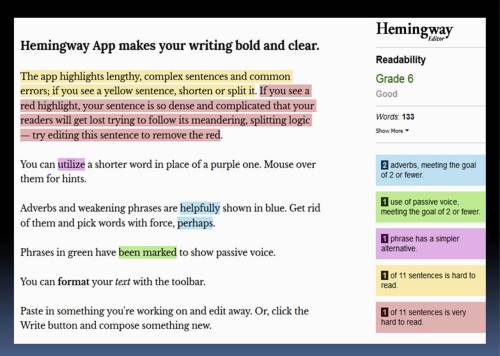 Highlighted in yellow will be sentences which are long or complex or which have common errors. The app identifies them, but it’s up to you to figure out how to fix them.

Highlighted in red will be sentences which are dense, that is, too full of information. Again, it’s up to you to figure out how to fix them.

Highlighted in purple will be words for which a shorter synonym is possible. Synonyms will be suggested by the app.

Highlighted in blue will be adverbs—a sign that your verbs aren’t strong enough to stand alone. The app won’t suggest stronger verbs, but it will identify adverbs, most of which should probably go.

Highlighted in green will be passive voice verbs. You need to figure out how to rewrite the sentence to make the verb active.

In the right margin will be a readability score, that is, the reading grade level of your passage.

Still, if your revising skills are poor, or if you are pinched for time, this app can offer suggestions on how to make your writing more readable.  The cost to download a desktop version (3.0) is $19.99, available for both PC’s and Mac’s.

Knowing this number can be useful.

• If the range is in the single digits, that means most of the sentences in a piece of writing are about the same length. The reader will find the writing boring, though the reader might not know why.

• If the range is in the high teens or twenties, that means there are some longer sentences and some shorter sentences. This range shows the writer has used a variety of sentence lengths. The reader will find this kind of writing interesting, though again, the reader might not know why.

When elementary school-aged children write, most of their sentences are ten words or less unless they are writing a sentence that includes a series or they are compounding sentences. So the range for such children usually is a low number—maybe nine or less. Older students write longer sentences, but again, usually their range is a low number—maybe twelve. Experienced writers might have a range in the twenties. But in order to get such a high range, writers must have a sentence with 26, 27, or 28 words, and another sentence with just a handful of words.

Notice the following introduction to an essay written by a fifth grader:

Have you ever played Monopoly? If you have,
then you know all about it. If you have not,
then let me describe Monopoly to you.

The first sentence has 5 words, the second sentence has 9 words, and the third sentence has 11 words. 11 minus 5 gives a range of 6. If the rest of the sentences in this essay are about 5 to 10 words long, the range would be small and the essay would be stylistically unappealing.

Compare that to the beginning of a narrative written by a rising second grader:

Once when I woke up I found a baby unicorn in
my tiny bed. It looked as tall as me with a tail
and wings, a purple and pink horn, and a white
and yellow body. Right away I jumped on the
unicorn and flew to a castle that is made out of
glass. She said I owned the castle.

The first sentence has 14 words; the second has 22 words; the third has 18 words; and the fourth has 6 words. 22 minus 6 gives a range of 16, an excellent range for such a young writer. Notice also that all four sentences vary in length by 4 words or more. Analyzing only sentence lengths, the second selection is stylistically more interesting than the first.

Did you notice in the last paragraph that a nineteen-word sentence was followed by a four word sentence? Often, a really short sentence after a long sentence can add style to writing. Students need to see examples of this kind of writing to know that it is not only okay, but desirable. Below is an example of a 36-word sentence followed by a 9-word sentence (a range of 27) from Because of Winn-Dixie by Kate DiCamillo.

Me and Winn-Dixie got into a daily routine
where we would leave the trailer early in
the morning and get down to Gertrude’s
Pets in time to hear Otis play his guitar
music for the animals. Sometimes Sweetie
Pie snuck in for the concert, too.

In the next blog we will talk about the mess all this revising creates in a student’s draft. 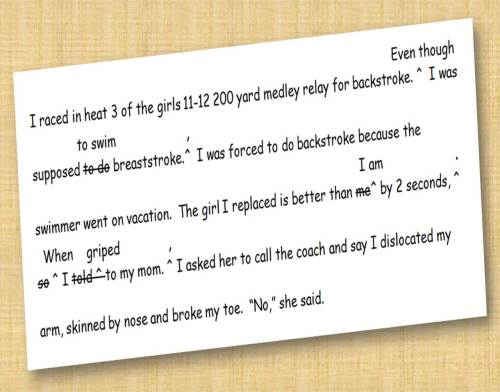 Here are revisions that combine sentences about a swim meet by a sixth grader:

Students start by figuring out the number of words in each sentence and writing those numbers in the margins of their essays next to the sentences. Students look for small numbers indicating short sentences. Usually, but not always, the short sentences need to be next to each other in order to combine them. Always they need to be in the same paragraph.

When the student finds a short sentence, he reads nearby sentences to see if the two sentences can be combined. Not all neighboring sentences can be combined. They need to be close in topic, or show some kind of relationship—a cause and effect, a sequence, or a dialog by the same person, for example. If the sentences seem related, the students and I discuss how they could be combined. Beginning writing students almost always suggest “and,” “but” and “so,” since these are the connecting words they normally use (and the words their school teachers suggest).

When I suggest alternatives, I need to keep in mind what will sound normal to a student of a particular age. What improvements I can suggest to a younger student, or to an ESL student are often more limited than what I can suggest to an older or more widely read student.

How about this example? “First, snowball fighting. We had the fight in our front yard. I was the one who made perfectly round snowballs.” The third-grader who wrote this fragment followed by two tiny sentences changed them to “First, my brothers and I had a snowball fight in our front yard where I made perfectly round snowballs.”

In our next blog we’ll talk about another way to revise sentences: adding more details in order to increase the number of words per sentence and to improve sentence structure.

Find the number of words per sentence, and then increase that number

First, why is having more words in a sentence important? 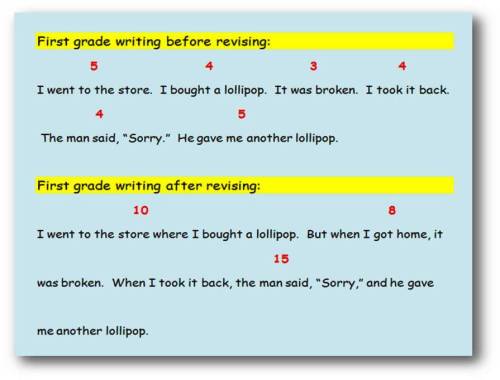 I begin by offering students a calculator.  Using a calculator in a writing lesson surprises students, yet they relish using it.  (However, because revising verbs and sentence openings often changes the number of words per sentence, this activity should wait until early revising activities are done.  Many students will want to do this as soon as they finish their first draft.  Restrain them until they have done the harder revising of verbs and sentence openings.)

Granted, these numbers are arbitrary.  But they are easy for students to remember and they serve the purpose of making students work to increase the number of words per sentence.  Rarely do I teach a beginning student who matches the target number in his writing without revising.  But with revising, the number always increases.

How do children increase the number of words per sentence?  We will look at that in the next blog.