Every good writer knows that during revising writing becomes really good—not in planning (though that is important), not in composing the first draft (though you must start somewhere), and not in copy-editing (though pesky commas and apostrophes must be set right). 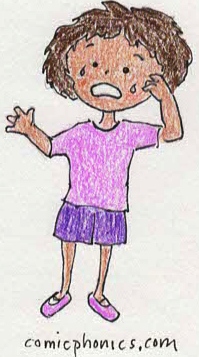 But what if a student never gets to the point of revising because of perfectionism?

Third grader, “Anna,” can’t bear an erasure to show on her papers.  She starts a paragraph and before the first sentence is done, she erases.  Then she tries to erase the erasure marks and in so doing rips her paper.  Anna starts over on a pristine piece of notebook paper.  But she erases again, maybe because a word extends too far into the right margin or because an “a” looks like an “o” to her.  She starts over again.  But another flaw happens.  I have told her that two start-overs are all she can do.  She begs to start a fourth sheet of paper.  She cries.  She freezes, and refuses to go on.  After an hour, Anna has nothing to show for her time.

I worked with a girl like Anna for several months.  In that time, she completed nothing.  Nothing.

Sixth grader, “Kyla,” reads a selection and writes responses to questions.  She gets most of her responses correct.  When I tell her one is not correct, she goes back into the text and orally defends her written answer with more evidence.  But it is the wrong evidence, or it is wrongly interpreted.  Still she argues that her answer is correct.  She will not accept that her response can be wrong.

I worked with a girl like Kyla.  She could not learn from her mistakes because she could not admit she made mistakes.  She exhausted me.

Suppose eighth grader, Sam, is assigned to write a narrative about what he did on his spring break.  He writes and then reads to me a four page single spaced narrative.  He describes packing his suitcase, driving to the airport, flying for hours and watching films.  At the end he has written not a word about what he did once he arrived at his destination.

We discuss how his response does not fulfill the assignment despite exquisite sentence structure and not a single grammatical error.  I ask Sam to rewrite.  We discuss what is required.  But the next week,  his mother cancels the lesson.  Sam cannot face me.

When you add one plus one, the perfect answer is two.  When you write, there is no perfect answer.  There are good ways to say something and better ways, but rarely is there a best way.  Extreme perfectionists seem to think there is one and only one best way to express something, or to hand-write something, and any way other than that one way is no good.  They see their writing as black or white with no shades of grey allowed.

For most perfectionists I have taught, the light bulb goes on when they realize that good writing becomes great through revising.  They want better writing and better grades.  They are willing to endure the cross-outs, erasures, arrows, and words between the lines and in the margins to improve their writing.

But for  a few students like Anna, Kyla and Sam, I do not have  words to make them recognize that perfectionism is making their writing worse, not better.  I suspect there are underlying issues which have led to perfectionism, and until those issues are addressed, I am spinning my wheels working with a perfectionist.