When to use parentheses

Parentheses are marks of punctuation used to separate a word, phrase, or sentence from the rest of a sentence.  Here are some suggestions on how to use them. 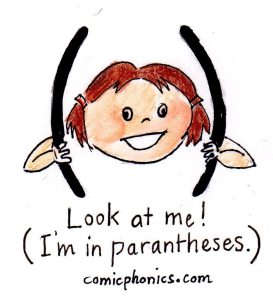 Parentheses within parentheses can be grammatically correct, but they can be confusing to the reader.  It’s a good idea to rewrite those ideas using one or no parentheses.

When a name can be reduced to its initials, say the complete name first, and immediately after the name put the initials in parentheses.  Later, when you use the initials in place of the name, you need to use an article in front of the initials.

In general, it is better not to use parentheses if you can separate information with commas, or if you can rewrite idea to obviate the need for parentheses.  Too many parentheses can muddy the meaning, and the first rule in good writing is to be clear.