Students need to learn how to choose a good essay topic

Kids think they need to choose a big topic, like the American Revolution, in order to have enough information to write several paragraphs for an essay or a story.  Wrong.  Choosing a smaller topic, a narrower topic, is always better.  But they need help learning how to narrow down a topic. 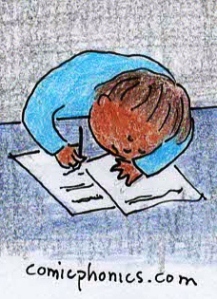 Now take one subtopic—say the Battles of Lexington and Concord—and help the students break that into subtopics, such as colors of British uniforms, the shot heard round the world, the Old North Church, guerilla warfare, why the British soldiers marched, how far from the boats were Lexington and Concord.  Wow again.  Those subtopics go on and on too.

Encourage students by saying they are getting much closer to a topic for a good essay.  Suppose you have read to your students that famous poem “Paul Revere’s Ride” by Henry Wadsworth Longfellow.  With them peeking over your shoulder, you go online and find out many artists have created books using the poem and illustrations.  You decide to see how different artists illustrated the poem.  You look at the covers and a few pages.  Wow!  The illustrations are so different.

Now tell the students they are really close to a good topic.  You suggest they take three of the illustrated books they like the most, and compare and contrast the illustrations of one idea such as how Paul Revere rowed across the river quietly so he wasn’t noticed by the British lookouts.  One book shows three men in a row boat under a full moon with a British sailing ship close enough so its shadow almost covers the rowboat.  Another shows the British boats at least a football field away with a tiny, sliver of a moon in the sky.  And a third shows what looks like white rags on the oars and a dog in the boat.

But wait!  In doing this online search for books illustrating the poem, you come upon a version of the famous story written by Paul Revere himself.  You ask the students to read what Revere wrote about how he crossed the river and see which artist nailed it.

Explain to the students how you went from a huge topic to a small but much more interesting topic.  They will be using one primary source (Paul Revere’s own account) and four secondary sources (the poem and three illustrations).

It takes time to find a good topic.  Without modeling, most kids don’t know how to do it.  Take the time to help them narrow their ideas.  A worthwhile assignment is to ask students to go through this process to develop a good topic whether they write the essay or not.

Writing is a process, and part of that process is narrowing down a topic.  Not every researched essay topic needs to be written.

This entry was posted in Declaration of Independence, how to find writing topics, narrowing a topic, writing tips. Bookmark the permalink.