How to write clearly for future generations

Many reasons exist for this difficulty, including sentence structure, sentence length, relative pronouns, and vocabulary. I would like to analyze the first paragraph of the Declaration to see what we can learn from words Thomas Jefferson penned 240 years ago in order to improve our writing today. 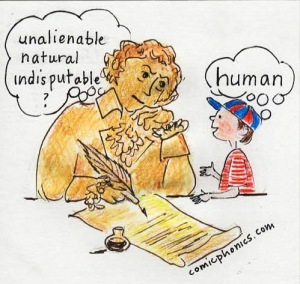 When in the Course of human events, it becomes necessary for one people to dissolve the political bands which have connected them with another, and to assume among the powers of the earth, the separate and equal station to which the Laws of Nature and of Nature’s God entitle them, a decent respect to the opinions of mankind requires that they should declare the causes which impel them to the separation.

To begin, this paragraph is a single, 71-word sentence. We know that the more words a sentence contains, the harder it is to understand (unless the sentence is a list). If a sentence of 30 words is pushing it, a sentence of 71 words is beyond what most people can follow. Many working memories stop after the second clause.

Secondly, this 71-word sentence contains six clauses plus infinitive phrases and prepositional phrases. Three clauses in a single sentence are sometimes two too many for clear understanding. But six?

Another difficulty is the pronoun “which.” It is used three times to introduce three dependent clauses.

But perhaps the greatest problem to modern readers is the vocabulary. Many words are familiar words used in unfamiliar ways. For example, the fourth word, “course” is a word we use all the time today (a math course, the course of a river, of course), but the meaning used in the Declaration is “progress or advancement” which is no longer its primary meaning.

When “course” is combined with “events” to form the phrases “in the course of human events,” the meaning becomes more muddled. What if Jefferson had written, “When, during human history”? Wouldn’t those words have said the same thing yet made more sense? To us, yes. But Jefferson was writing the most formal document of his life.  He chose to use formal language—formal even for the 18th century.

What if Jefferson had written something like this instead?

Sometimes a group of people need to sever their political connections with another group of people and to become an independent country. When this happens, they should explain why they are separating.

My 32 words are not nearly as elegant as Jefferson’s, but to modern ears, they are easier to understand (39 fewer words; two sentences instead of one; one simple sentence and one complex sentence with just one dependent clause; and everyday vocabulary).

Think ahead 240 years to the year 2256. Will Americans then still find my words easy to understand? How can we write diaries, letters, memoirs or war stories  which will make sense to our descendants?