Gender and number distinctions in English 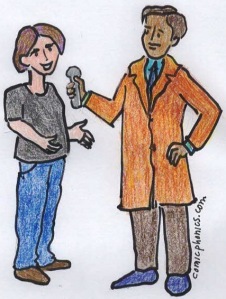 In English, we say “you” for everyone—friend, stranger, sister—and for singular and plural.  Whereas the French need two words—“tu” and “vous”—English-speakers need only one.

This can bring both a pain and pleasure.  For English speakers learning French, needing to remember when to use “tu” and “vous” can seem a needless distinction.  If one word suffices in English, then why can’t one word suffice in French?

For French speakers learning English, the ease of learning one word, “you,” is a pleasure.  But they might think something is lost—that fine distinction between “tu” and “vous.”  Sometimes “you” might seem too impersonal.

Something of this same forced distinction applies to the new use of “they” to mean the singular as well as the plural.  I get the reasoning and feel sympathy for people for whom gender is not clear cut.  But for me, after a lifetime of “they” meaning the plural, I find it strange that “they” now should include “he” or “she.”

I feel like the French must feel when asked to include everyone in “you.”  Or like Iranians—who have three or four words for “love”—when asked to fit those shades of meaning into one English word.  Or like English speakers with at least nine verb tenses plus modal verb tenses—when asked to express all that nuance into a single Chinese verb.

I wish English had a singular personal pronoun unrelated to gender, something like “it” which could apply to people.  How about “ye”? Or “thee”?  It seems easier to wrap my mind around a new pronoun than to expand and confuse the meaning of a traditional word.

This entry was posted in gender specific words, pronouns, they. Bookmark the permalink.