When I work with student writers, I ask them to evaluate their own writing.  The process I use is simple and works no matter what type writing the students do.

After the student has revised a piece of writing, I draw a large “T” which creates two columns.  I label the first “Did well” and the second “Needs improvement.”  I ask the student to identify what was done well and what needs work. 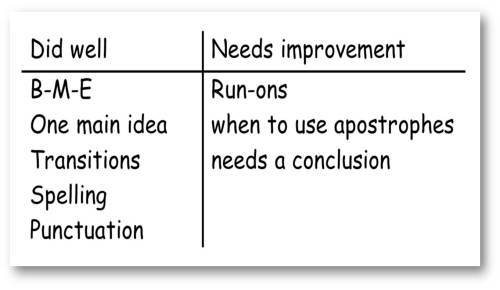 I try to list at least three things the student did well, no matter how basic his writing is.  Handwriting, starting sentences with capitals, writing periods and commas that look like periods and commas—I search for positives.  The more the better.

Then we move to the “Needs improvement” column.  Usually the student will mention errors we have just corrected during revision.  He might say “run-ons” and using a word like “so” or “just” over and over.  With practice he will identify the conceptual errors, such as organization problems or not writing a topic sentence.  I  bring up one of these larger issues and go back to the paper to show an example of that problem.

I limit “Needs improvement” to three so the student doesn’t get discouraged and so he can keep those three in mind the next time he writes.

After we do this many times, the student realizes he is making the same kinds of mistakes over and over.  When this happens and a student is about to write a  new draft, I ask him what mistake he is likely to make.  He says, “run-ons” or “a hook that doesn’t hook.”  This helps him focus on how to improve his writing while he is writing, long before we evaluate it.

This entry was posted in teaching writing, writing assessment. Bookmark the permalink.