Good advice is good advice.  And so I am repeating “Ten things good writers do…” from a blog by Dr. Timothy Shanahan, a literacy expert, whose weekly blog can be accessed at http://www.shanahanonliteracy.com/  The words in boldface are Dr. Shanahan’s ideas.

Good writers make a good first impression. They rewrite their introductions and first pages many times because they know if those words don’t grab a reader, the reader will put down that piece of writing and move on. But you don’t have to be a professional writer to hook a reader in the first sentence or two.  Read this sentence by a fifth grader:

Or notice these introductory sentences by another fifth grader:

Good writers make their endings strong, too. Good writers know how to make a reader smile or nod with satisfaction at the end of a piece of writing.

Notice how this fifth grader ends a narrative about the ordinary day he expected.

I was wrong in the morning thinking it was an ordinary day; it turned out to be a great day.

Or notice this ending paragraph by a fourth grader.

Together, my camera, my computer and I can make a movie.  You can too!  If you aren’t perfect, keep trying.  Don’t give up.  I wasn’t perfect either when I started. 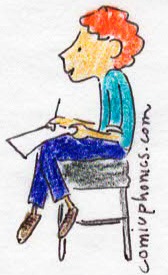 Good writers organize their articles and stories so that readers can follow along without getting lost or confused. Good writers use topic sentences that tell the reader what to expect. They use transition words like “first,” “next,” and “finally.” Or they use chronological order, including time words such as “in the morning,” and “later that same day.”  Notice how this first grader began a fairy tale using transitions.

Once upon a time Little Red Riding Hood was carrying a basket of blueberry muffins and walked into the woods to her grandmother’s house.  And then she spotted a wolf.

Good writers rewrite.  In fact, they expect to rewrite, knowing that good writing becomes that way by improving verbs, by streamlining ideas, and by varying sentence beginnings, lengths and types.  See how this third grader revised part of an essay on sperm whales by adding more details.

Sperm whales, who dive up to two miles, are the deepest diving warm-blooded mammals on the planet.  They have the biggest brains of any animal, living and extinct.  Ridges and a triangular hump replace a dorsal fin on one third of their backs.  Two thirds of their colossal bodies look like a rectangle and one third of the body is the head.

Good writers don’t just tell something, they show it. In informational essays, good writers give examples to show what they mean. In narratives, good writers show a character acting, such as his hand wiping away a tear, or his foot tapping, so that the reader can judge for herself if a character is sad or excited. Here is how a kindergartener showed a character.

Linus is squatting down to feel the snow. . . .Then he found sticky snow to make his snow ball out of. . . .While he was working he stuck his tongue out. 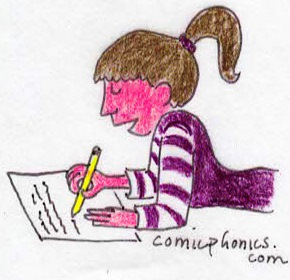 Good writers use sentences that are varied and interesting. They vary the verbs in sentences, begin sentences with different words and different parts of speech and write some long sentences and some short sentences.  Notice how this sixth grader starts an essay with a 20-word sentence followed by a six-word sentence.  He starts with a prepositional phrase but the next sentence begins with an adverb.

During Winter Break, my sister and I always vote to visit cool areas where we can ski, such as Colorado.  However, my dad rejects the idea. 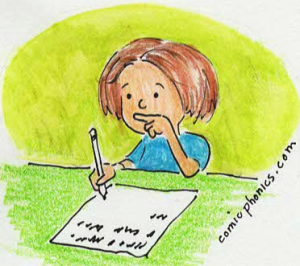 Good writers write for the ear, not the eye. Good writers read their writing aloud and listen for ideas that are not clear. If characters are speaking, good writers make characters dialog sound different from one another. Since most people don’t talk in complete sentences, good writers have their characters speak naturally, even if that breaks rules of grammar.  Notice how a second grader uses dialog to explain what a book is about.

One hot summer day Nate the great was in his garden weeding when Oliver the pest came over.  “I have lost a weed,” said Oliver.  “No problem,” said Nate the Great.  “You may have all of my weeds.”

Good writers elaborate; they try to share a lot of information and detail. Good writers provide lots of detail—numbers, dates, seasons, days of the week, proper nouns, dialog, sensory information, and examples. Good writers put themselves in the shoes of the reader and provide the information that a reader needs even if the writer already understands it. See how that same second grader uses detail.

A long time ago a family lived in a tiny house on a farm in Texas with a very wide field with wheat and corn.  On the farm they raised animals too.  For example, they raised cows, sheep, chickens, a pig and a dog.

Good writers get their facts right, even when they are writing fiction. In passages about science or social studies, good writers use the proper vocabulary. They check their facts online or by talking to experts.  They go over their writing to be sure names are consistent and numbers are accurate.  Read how a first grader uses scientific facts which she researched.

The Indian or Asian Elephant is one of the important animals in Asia, living in India, Burma, Thailand, Laos and Vietnam.  The elephant has brown or gray wrinkled skin.  Ivory tusks grow on elephants.  They help dig roots and are used against predators.

Good writers should know when to quit. Good writing is concise writing. The writer needs to trust that the reader will understand the first time if the writing is clear enough, so repetition isn’t necessary. And that’s why I am going to stop now.  –Mrs. K